The Value of Emoticons

share »
Around 2:30 in the afternoon on Monday, April 15, I got an email from my boss.
"She looks happy to announce the bomb," he noted, and included a screenshot he had taken of a tweet. In it, a smiling woman's face peered out at me from the user icon, her cheerful expression belying the seriousness of her message:

This led to a conversation between me and several of my coworkers (boss included) about emotions and emoticons in social media. Would it be of any value for Twitter to begin including "mood" or "emoji" settings-- even those as simple as mere indicators of positive, negative, and neutral sentiment?
As a marketer, I would vault over a number of very large and potentially fiery objects to get my hands on that kind of information and know that it’s accurate. Our current natural language processing algorithms are notoriously bad at analyzing sentiment. But as a social media user in my own free time, my reaction is a little more complicated.
NPR had an interesting segment on this in October of 2012. In Social Media Advice: When Are Emoticons Ok? social media gurus Deanna Zandt and Baratunde Thurston discuss the function of emoticons in our digital discourse.
Said Thurston, "We've evolved to communicate in so many different ways. As human bodies and human people, we've got smell and facial expressions. And the Internet strips all that away from us... and forces us all to become writers. And not everybody is a writer." 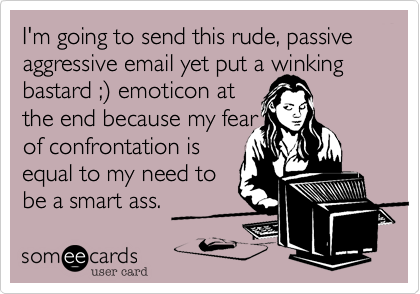 As both Thurston and Zandt point out at one point in the segment, emoticons are often used passive aggressively, especially in text messages. "Way to behave at that party last night ;)" could mean a wide variety of different things. Is it congratulatory? Sarcastic? Flirtatious? Though all messages rely on context, including the context of sender and recipient, the context of social media gets even more ambiguous than the context of SMS texts or emails because they lack the immediacy of one person speaking only to another within the frame of a conversation.

Facebook is testing out their own solution to this problem in the form of an emoticon system. Users now have the option of including their current emotions, or what they're watching or eating or listening to, in their statuses. As Josh Constine pointed out in January on Tech Crunch,

"[Emoticons] could help [Facebook] to connect you with advertisers who want to reach people who frequently watch TV and movies, or listen to music, or eat at restaurants... If you choose a particular pre-formatted emotion, piece of media, or food, Facebook could potentially use that behavior to pinpoint you with ads."

When the Facebook emoticons rolled out in full last week, I had several very amusing posts pop up on my newsfeed that indicated to me that perhaps the tool isn't being utilized in the way it was intended for. 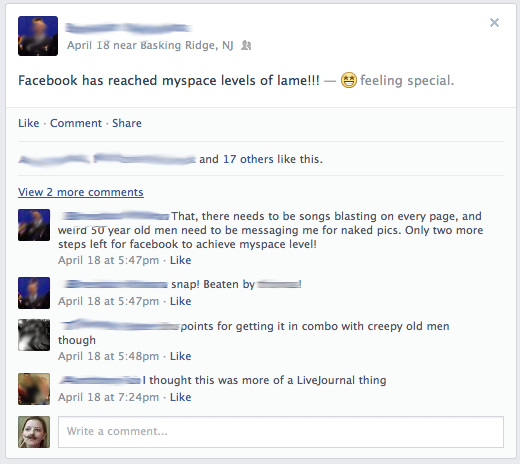 The post mirrors my own reaction. The "How are you feeling" icons reminded me of the old school emoji found crawling around on the internet in the early 2000s, in the heyday of Myspace and AIM. And, too, emoticons can seem trite when used in public-- it seems almost demeaning to have to resort to emoji to express myself. To paraphrase one of Deanna Zandt’s articulate statements on NPR, we're letting our tools do the work for us.
However, I'm not writing off emoji completely. Regarding Facebook's emoji, I think half the problem is in presentation. As a user, I don’t want to employ a tool that’s going to force me to convey my emotions in the same manner that I did when I was a young teen angstily blogging away on Livejournal. I will, however, use a tool that can provide value to me in my interactions with my peers and with brands. Which brings me back around to Twitter.

In spite of my hesitations, I have to say that there's something about being able to tie emotions to tweets that just makes sense, both from a personal standpoint and from a brand standpoint. The 140 characters in a tweet are precious; sometimes, emotions can't be completely expressed in such a small space. Though hashtags have become a kind of quasi-emoji (for example, #fml or #yay), oftentimes 140 characters just isn't enough space to convey information about what's going on, AND a description of the reaction it causes in you.
As a marketer, I would like to see users provided with a better channel for expressing the sum of their sentiment on Twitter. As a user of the platform, there have been times when I would have liked more clarity on what people were thinking or feeling. Allowing a box for one extra word under 15 characters to summarize the emotion of the tweet might be a great way to increase brands' abilities to determine customer sentiment on Twitter while also allowing Twitter users to make sure that people know that, in some cases, what comes across as belligerence is just sarcasm after all.
I can't tell you how many stupid fights I've seen on Twitter where both sides were effectively arguing the same point, but the character cap led to misunderstandings and bad feelings between @UserA and @UserB. Being able to add a simple tag encapsulating the true feeling of the post could be a great way to enhance the user experience on Twitter, after all. Because when you think about it, there's a big difference between this:
"@leighacarver posts on @volacci today about the role of emoji in social media… never has the obvious been so interesting. --sarcasm"
and this
"@leighacarver posts on @volacci today about the role of emoji in social media… never has the obvious been so interesting. --fascinated"
Perhaps I've spent the entirety of this monstrous blog entry beating a dead horse, but I'm interested to hear what you all have to say. We all know it makes sense for marketers, but is there a place on social media (from a user standpoint) for emoji or other emotional summations? Let me know what you think in the comments below!