Lessons Learned as a DrupalCon Presenter

Drupal Marketing is Hot and so is Drupal 8 SEO

DrupalCon Baltimore was my 14th DrupalCon and it was a very interesting and eye-opening experience. The Drupal community is maturing just as Drupal as a content management system is maturing. I saw a lot of the same people that I’ve seen for years and I met a lot of new people, too. Though I haven’t seen the actual numbers, I felt like it was a bit smaller than last year. (edit: It wasn't. Drupalcon grew by 5%. Hat tip to @ryanszrama) It could be that the layout of the Baltimore Convention Center is more compact than previous venues making it harder to gauge. Still, I had hoped to see continued growth of the community and Drupal as a whole so it was a bit disappointing.

In addition to walking around the tradeshow and attending some great sessions, I presented a two-hour training session on Drupal 8 SEO. The purpose of this session was to teach marketing people how to achieve SEO results with minimal need for developer help. Based on this, I came away with these lessons learned from DrupalCon 2017.

1.     The Drupal community is growing with marketers.

The marketing vibe was strong at DrupalCon last month. Since the first DrupalCon that I attended, I’ve seen it move from a group of developers wanting to build and support an exciting, new open source CMS, to a strong presence of marketing people who are looking for ways to maximize their website lead generation efforts. Websites are an important part of any marketing strategy and Drupal 8 supports marketing efforts better than any previous version.

And that feels great! While I’m a pro in a very particular niche in marketing, I have been pounding the “Drupal for marketers” drum for 12 years in this community. Often alone but more often with a few great people like Amy Cham, Kenna Poulos, and Danita Bowman. The Drupal agencies are finally getting the message, too.

While Drupalcon is still very much about developers, it’s maturing into a marketing powerhouse and it’s great to finally see it!

2.     There is a need for more SEO education in the Drupal community.

The growth of Drupal 8 as a viable platform for marketing has meant that people are more and more interested in SEO. In my Drupal 8 SEO session, I found a wide range of Drupal knowledge and skills. For example, some people were still installing modules manually. (Dirty secret: so do I sometimes.) One session reviewer said, “I am a marketer just starting Drupal and have a good grasp on SEO, but that said, I was too busy installing modules and could not keep up.” For others, the pace was just right: “This was by far my favorite session at DrupalCon. Ben had the talk set up perfectly and walked us through helpful steps that we needed to take for SEO.” In spite of the skills gap, 15 out of 15 attendees said that they learned something in this session.

People are looking for more Drupal 8 SEO education. Said one reviewer, “This topic area is huge, so even in a two-hour seminar, there was well more than could be covered.” Another wrote, “Grateful that this was a hands-on workshop, wish there were more of these.” The new hands-on session format was a big hit. I was thrilled that one attendee said, “Worth the price of the admission for the whole conference!”

3.     The Drupal community will survive and thrive.

If you are familiar with the undercurrents going on in the Drupal community, you may question its long-term health. Families fight. The Drupal community is a big family--so fighting is natural. But families also overcome differences and continue to live and work together. While there have been a lot of negative online communications, at DrupalCon, people were more interested in solving the problems and focusing on the Drupal product. Discussions of Drupal governance is a good thing. It enables conversations on how this big, open system can be better than ever. My time at DrupalCon has convinced me that this Drupal community will solve the existing problems and thrive as it works together to provide a cutting-edge product for the future. 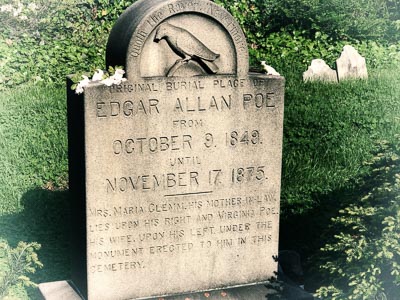 So it’s not related to Drupal, but I never made this connection until I visited Poe’s grave and memorial. The name of the NFL football franchise, the Baltimore Ravens, comes from one of Poe’s most famous poems, “The Raven,”. Well, duh, says all of the people from Baltimore. The rest of us are just getting it. In fact, with a little research, I found out that the team’s three mascots are named Edgar, Allan, and Poe.

Alright, Baltimore! I’m all for using literary allusion in pop culture. It makes me like the Ravens that much more. Still a Cowboys fan, tho.

Drupal 8 SEO fills an important need in the community.

When Drupal 8 came out with so many great changes for SEO, I recognized a need for a new informational book. While I wrote Drupal 6 Search Engine Optimization several years ago, Drupal 8 really needed its own new topics. That’s where Drupal 8 SEO comes in. This book provides detailed instructions that marketers can use to set up SEO for their Drupal 8 website.

Session attendees walked out with a free electronic copy of Drupal 8 SEO. But you can get your own printed or electronic copy. Click here for more information.

A Drupal SEO Expert and a Drupal Developer Hit the Mat